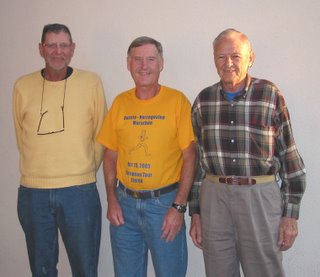 From left to right:
Norm Frank, John Wallace & Wally Herman before the Ocala Marathon. A total of 1833 marathons, two World records and one NA record.


This marathon was planned as another tune up or training marathon in my training program to get in peak shape for the inaugural Sarasota Marathon on Mar 5/06. I had one concern during the week – “Would my legs recover fast enough after the Miami Marathon to be able to run a fast race in Ocala?” After a speed workout on Tue that included four one-mile bridge repeats across Ringling Bridge I wasn’t too confident? My legs were tired! On Thu I decided to go to my local torture chamber for a massage in the hopes it would help rejuvenate my legs? The massage did help but the masseuse – Attila the Huness – found a problem I didn’t even know I had? The tendons in both feet were very sore and tender – no doubt the result of wearing racing flats in Miami and the speed workout on Tue. Racing flats are very lightweight but don’t provide much cushion or support! I was on the verge of suffering plantar fasciitis in both feet – a very painful and slow-healing injury! I hope I discovered the problem in time to prevent it from becoming worse?
I will have to wear heavier running shoes with much greater support and cushion and continue to massage the inflamed tendons to get oxygen to them to help them heal faster. Anti-inflammatory drugs are not an option because they eat holes in my stomach! So I now have to balance my need/desire to train hard with the need to rest and give the feet time to heal. Well nobody said life was easy!

And I couldn’t cancel the marathon in Ocala because I had a friend - Dr Dick - visiting from Connecticut who had agreed to run the marathon with me. Dr Dick and his wife Dr Sue are members of the BBR (BookBachRock) – an informal running club we had in Dallas during the 80s & 90s before many of the members started to retire and move away from Dallas. My friend Frank, from Siesta Key also planned to run his first marathon since Boston in 2005. If you recall Frank is the runner/friend I paced through Boston ten months after his quadruple heart bypass. Everyone in the world thinks/says that we are both crazy so Frank and I came to the conclusion that the whole world is crazy and ‘we are the only two sane people left’! However Frank promised me at the end of Boston that he would follow his doctor’s advice and never run another marathon so I am not so sure about him any more?

On Sat morning the East Coast Chapter of the BBR (Frank is an honorary member) drove north to Ocala to pick up our race packets and drive the marathon course. I have run this marathon twice before and remembered most of the course that is on narrow two-lane roads with lots of rolling hills through the scenic horse country of Florida. After our course tour I introduced Dr. Dick and Frank to two of my running mentors who were running Ocala – both are legends in marathon running: Norm Frank (age 74) from Rochester, NY is the North American record holder for the most marathons (905) and Wally Herman (age 80) from Ottawa, Canada has run 670 marathons and is the world record holder for the most countries (98)! They are both very nice gentlemen in addition to being running legends.
After a traditional pasta dinner we retired to bed early – I had upgraded Frank to a hotel suite (much nicer than our roach and mold-infested room in SoBe last weekend!

There were two races – a marathon and a Half – with a total of 500 runners in both. Both races started at 7am on Sun. The weather was much better than we experienced in Miami last weekend as expected – temps of 45 F with a high of 64 F and light winds forecast. It was sunny and 54 F when we finished the marathon. Dr Dick and I planned to go out at an 8 min/mile pace and Frank planned to follow the ‘Galloway method’ – a combination of walking and running. Wally and Norm had started the marathon two hours before the official start because they would take about 7 hours to finish.

Dr Dick and I lined up on the start line with the Big Dogs which was a mistake because they pulled us through the first 2 miles in 15:35. I forgot to mention that Dr Dick is 10 years younger than Maddog and a faster runner when he is in shape so I was concerned about keeping up with him. He, on the other hand, had not run a marathon since last Oct and didn’t think he was in good shape and was concerned about keeping up with Maddog? We decided a sub 8-min pace was too fast so we threw out an anchor and slowed down the pace. A few hills in the next few miles helped and we passed mile 5 in 40:18. Around mile 7 we were joined by two runners from Florida. One was in Dr Dick’s age group and was trying to run a 3:35 to qualify for Boston. We ran together for about 3 miles and passed mile 10 in 1:20:47. We were averaging an 8:05 pace but I knew at that point that the old legs did not have the ‘spring’ or energy to run a 3:30 marathon so I started to slow the pace down and let our new friends pull ahead.

Dr Dick and I passed the Half in 1:46:23 and I commented that I could not run another 1:46 for the 2nd Half! It was obvious that the old legs had not fully recovered from Miami so I slowed the pace down some more because I did not want ‘to hit the WALL’ again in the last 10K. We passed Wally and Norm around 16 miles and I started to struggle around 18 miles. Dr Dick was still running smooth and easy so I told him he should leave my tired old ass behind and try to catch the Florida runner in his age group. I figured that he would win or place in his age group if he beat that runner? He was concerned because his longest training run this year was 20 miles and he would soon be approaching unchartered territory so he preferred to remain cautious and conservative with his pace. We passed mile 20 in 2:44:20 and I knew that even a 3:35 was not going to happen – and I didn’t care! My legs were tired and tight and both feet were hurting but I still felt that if I ran smart (and slow) I could avoid the painful WALL! I slowed the pace to 8:30s, focused on blocking all pain and ignoring the shameful cries from my legs to stop or walk and continued to push through the hills! We reached mile 23 in 3:09:47 and my slowest mile of the race (8:50). I urged Dr Dick to push on ahead and catch his age group competitor but he didn’t think he could do that without draining his legs and he had a home club race next weekend that was more important to him. So he stayed with me and used running pysch tricks to urge me on. I decided it was time to suck it up, hurt a little more and push the pace to get this pain/ordeal over with as quick as possible so I managed to lower the pace to 8:30s for the next few miles and then pushed the pace down to 8:15 for the final mile to cross the finish line in 3:37:09. Dr Dick finished 1 second before me for 27th place overall and I finished 28th! Two women beat us but my time was good enough for 1st place in my age group (2nd place was 20 minutes behind me)! Dr Dick finished in 4th place in his age group – that Florida runner had finished 3rd in 3:33 and qualified for Boston. Dr Dick wasn’t sure he could have taken those 4 minutes off his time?

Since Frank’s goal was to finish under 5 hours we drove back to the hotel for a quick shower and then returned to watch Wally and Norm finish in 4:44 (actually 6:44 with their 2-hr early start) and Frank finish in 4:57! He was very happy to beat 5 hours! I was happy to see him cross the finish line - ALIVE! After a quick shower for Frank we drove back to Longboat Key to enjoy a long HOT soak in the hot tub with lots of beer while I slow cooked a ton of prime rib on the BBQ to provide the necessary protein to help our muscles recover and heal.

We all enjoyed the very scenic marathon and course through Florida’s horse country. The marathon was very well organized – mile markers every mile, water stops every 2 miles and lots of volunteers along the course where needed for traffic control and directions. I will probably run this race again next year.
The only bad news of the day was:
a) my feet were very sore after the race and may slow down my training program as I try to avoid a serious problem with plantar fasciitis
b) The Seattle Seahawks lost the SuperBowl

Fortunately my next marathon/tune up race is not scheduled till Feb 19th so I have a few weeks to recover and hopefully get rid of the plantar fasciitis problems.

Stay tuned for the next report!
Posted by Maddog at 1:27 PM